East New York Brooklyn, and its churches…How does religion stay plentiful in poverty 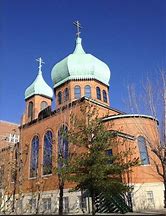 East New York Brooklyn, and its churches…How does religion stay plentiful in poverty

In this project, I would like to introduce to its viewers, the East New York section of Brooklyn. Located on the eastern most tip of Brooklyn, it is the area of Brooklyn, that gets closest to Queens. The area is the home of many different ethnicities, but it is also an area of Brooklyn in which 47% of its residents fall below the poverty line. This neighborhood is my home, I was born and raised in this section of Brooklyn, by my grandparents who moved into this community in the early 1950’s. The area has changed hands many times. It was predominately comprised of eastern Europeans and Italians prior to the 1950’s. With Howard Beach being its adjacent neighbor, many Italians who could not afford Queens, lived in East New York. One aspect of this community that always stood out, was its churches. Many of the churches in this community qualify for historic preservation status, but sadly the proper paperwork and permits were never completed to make the process complete. I chose to document this area and its churches, because it’s where my familial roots have been embedded. When my grandparents moved into the neighborhood, the housing development in which they lived, was built and purchased by the church in which they worshipped, Grace Baptist Church of Christ. In the 1970’s the church purchased a housing development for their members and other families of the community could apply, and the housing development was named Grace Towers. My family was deeply rooted in the church in my formative years, so with this project I began to ask myself, why have the churches of this community been the mainstay?

As a resident if this community in the past, I know that the churches vary in many aspects. Muslim Mosques, Spanish Iglesias’, Catholic Churches, Jewish Temples, even Baptist Church’s housed in old former 1800 Jewish temples, make up this communities’ religious population. Once I began this research, I noticed things that I would have usually overlooked. An area of Brooklyn void of a Starbucks, spa or Chipotle, being thus void of gentrification. There are no dog walkers or pet spa’s, but you may see a random Pitbull off the leash or a stray cat taking a bath in a broken fire hydrant. The churches of this community are thriving though, the membership body is constantly growing and tithes are not dropping, so that was my query. With ½ of the population of this community being on some form of public assistance and below the poverty level, why were apartment buildings abandoned, but not the churches.

Through the camera lens, I captured aspects of East New York that are seldom spoken of. I used InShot on my Iphone to edit the videos, it’s an app that a lot of Vloggers use. To splice, trim, add music and effects, I used Power director on my PC. I am no editor by far. I barely use word and excel correctly, so this task presented itself to be a challenge at times. I have a little knowledge on InShot and Power director from using it on a podcast that I do, but I found out very quickly that sitting at a table talking on a microphone for 45 minutes and editing that, is not comparable to what I needed to accomplish for this project. Removing background noise and echoes, speeding up the frames and then slowing them down was challenging. I wanted to reflect the churches, aspects of the detail on the various buildings, and show a bit of the community also. The interviews were a challenge. A lot of people had questions, when they saw me filming, but none wanted to partake. The interviews that I did get, were difficult because the participants wanted to ensure that I would not incorporate their faces and one even wanted a voice to be edited. It appeared that many were scared to speak out against the church. Many spoke with me privately, and gave accolades to their respective Pastors and church leaders, they all seemed happy and joyous, but none would speak publicly.

The entries that I am most proud are my interview with Minister John Stubbs, of the Eastward Missionary Baptist Church, the images of the mega-church Christian Cultural Center, and Muslim Mosque that is hidden above a bodega. The interview with Minister Stubbs, came about after I almost gave up hope. I called about twenty different churches to request an interview with the Pastor, Reverend or Minister and I was denied. Almost ready to scrap the interview and give up, this minister called me personally and set up a date and time. I could hear myself saying thank you to him, one too many times, but I was indeed elated. He shed light into the role that the churches play in these impoverished communities and I think his aspect was needed to tie the project together. The meg church, Christian Cultural Center or CCC is pastored by Rev. Bernard who is a hefty contributor to political parties and has his hand in a lot of business ventures. The church itself takes up about 5 city blocks. They have security, various parking lots, a gazebo, and their own staff. Big signs illuminate the entrance saying that “trespassers will be prosecuted”, thankfully on the rainy Sunday that I decided to venture out, I was able to sneak past security and capture images undetected. The Muslim Mosque was a highlight for me, because I never knew it existed. The call for prayer can be heard for a mile in any direction, but when I followed the call to its origin, I found that the mosque was just a room over a corner store, with an awning so small that you could miss it. The irony is that a call for prayer so loud and commanding, was originated by a place so obscure and undetectable. That theory in itself lends to the theme of this entire project, the people of the community so obscure and undetected in relation to most Brooklynites, but what drives them on days of worship, is their relationship with their various Gods.

I wanted to document the church aspect because for the community to be one of the forgotten in Brooklyn, in which gentrification has not crossed into the borders, the residents are very attached to their various churches. Most being members for years, the dedication of these residents enable these religious bodies to be a staple in this impoverished community. In an underperforming community, such as this one, I just wanted to document how religion may be the stronghold that it may need. I hope you enjoyed! PS: God is Dope (My closing image show’s how personal this project became for me, that I went out and purchased merchandise lol)