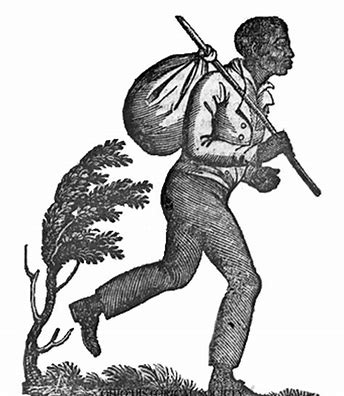 As of recent, I have been intrigued by stories of slavery and the ante bellum south. I am a descendant of slaves going back to the 1600’s in South Carolina and Virginia, so when I came across the database for fugitive slave announcements and faux “wanted” posters, it piqued my interest. Many of the enslaved, mostly of African and Caribbean descent, rejected their encapsulation and sought freedom by any means. This at times took strategic planning and skill. Speaking in codes, and through song, they would converse with one another within earshot of those overseeing them, and through hymns and phrases, unbeknownst to others, they were mapping. Gathering what they deemed essential and what may aid them in case they had to defend. Some had to leave behind families all under the guise that freedom may have been eminent, and they would send for them later. Some mad it, many didn’t, but this database link shows how fervent the owners wanted them captured. Slaves equated to work and productivity. The loss of one could be felt at times, and these owners were all about capitalization. Offering rewards sometimes greater than the cost of purchase, they sought feverishly for return. Productivity was a driving force, but setting an example was the mission. If one escaped and got away with it, a precedence would be set to make others think that it was possible for them. Slave master did not want a coup to arise, so they had to make an example out of those who disobeyed. Seeking freedom and being caught, may have been worse than they journey. Walking by foot, following stars and directions that may not have been accurate from those who tried before, sleeping in swamps and marshes trying to stay out of sight was 5-star accommodation compared to what was to be given to those caught.

This database is interesting to me, because it is a way in which ancestors of the enslaved can possibly trace their lineage. Some runaways actually made it to free states where they could pass as free without the papers. Doing research on slavery, slave resistance and freedom would be helpful with usage of this database also. Another aspect that one can explore is what role did literacy play in these escapes? To compare the number of slaves that escaped and were never caught with the amount who could read and write would be interesting. A lot of the wanted posters go into detail about which languages the escapee spoke. It was interesting to see that some were fluent in more than one language which showed the diversity of where they may have originated, and also learned practices from where they were placed.

The target audience can be scholars of African American studies, journalists doing research on slavery, linguists looking to link language and culture, the list can go on. It aims to accomplish bringing awareness to the measures that were taken to track down escaped slaves. This was a business, bounty hunters made what would be considered a lot of money for those times, hunting and returning slaves for profit. It is successful in highlighting that aspect because you can see these digitized copies that have survived centuries. You can read the descriptions and get a feel for how these people were viewed. I appreciate when just reading can transport you to that time because of the wording, and these posters accomplished that. Also, being able to go from state to state is helpful. It may be biased in the states listed, it gives the appearance that states unnoted were free of slavery which is untrue. I would recommend this to any author who may be gathering research to pen some authentic ante bellum period writing. I would also recommend it to families, looking to do uncover ancestral information.