In the past few weeks of class, we’ve been talking about the difference between close reading and distant reading. Close reading is analyzing a single piece of work while distant reading is looking at the “big picture” as a whole. Isabelle Whitney is a female poet around the 16th century. Around this time, woman still struggled to get independence and power and she overcame obstacles women faced to become published writers.

I used to Voyant tool to distant read dozens of her poems all put in one book, which is called, A Sweet Nosegay, or Pleasant Posy: Containing a Hundred and Ten Philosophical Flowers, by Isabella Whitney. I loaded the file and this is what showed up as a whole. 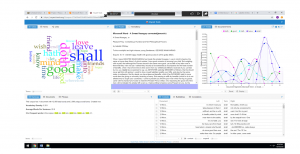 On the upper left-hand corner, you can see that some words are bigger than others. From this display, you can conclude that the word sizing goes based off of how often the words are used. The biggest words are used the more frequent, as the word gets smaller, the less frequent it’s used.  One word I decided to look at is the word “shall” since it’s the most frequent. You can also tell word frequency by analyzing the tool on your far right-hand side of the picture.

The tool I decided to use to analyze was the tool in the upper middle part which is called the TermsBerry tool. 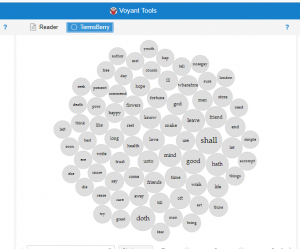 In this tool, I think when you hover over the word of your choice, it highlights all the words that were associated with your word of choice. Since Isabelle’s Whitney’s time was in the 16th century, words were a little different. For example, the word that I chose was “shall”, which means should. When I hover over the word “shall”, all of these other words were highlighted.

As I hovered over the word shall, I see that over a dozen other words were highlighted.  When I associate the word shall with the words thats highlighted, I think of freedom since this is the time where women didn’t really have any power. The words that highlighted that really caught my eyes were seek, day, cease, know, trust, good , let, happy, and soon. When I think of these highlighted words, I connect it with the time frame that she’s living in, and I feel like she’s wishing for something to change.

I decided to dig deeper in analyzation and try to use more tools with Voyant, I decided to click on the highest point of the frequency chart and looked at what changes were made.

These poems are a little difficult to pick apart, but the tone of the poem sounds like she’s either demanding something, or wishing for something to happen. In the poem she says “In which I trust you shall find safety: and if you take pleasure in them, I shall not be occasioned to suffice, and he no wit shall want, And for my part in healthy state thy mind shall ever dwell”.