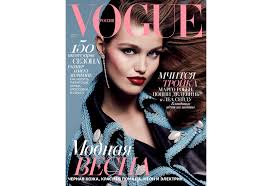 Distant Reading Used in Vogue Magazines
The distance reading project involving Vogue magazines seeks to assess how the magazine cover has changed over the years in regards to the color, the angles at which the models were photographed from, the language that way being used the most to advertise to audiences and just the language used generally throughout the article. This allows readers to get a more accurate idea of what was relevant the most in the fashion world in the span of the decade and the overall direction in which things shifted. This project is successful because researchers are able to skim through multiple images at once, which will allow them to determine the best way in which they should organize the data. The example of the Vogue magazine covers allowed researchers to sort the information by colormetric space and cover averages. This would not have been possible if researchers chose to close read several magazines and then compare and contrast. The data would be too small not representing the amount of Vogue magazines ever published
The target audience for this project is students who are studying fashion trends and people who create and design the magazine covers/content. It can can be implied that researchers are a target audience for this project because in one aspect of the project, researchers focus on what words were used the most within ads, articles, or all texts. By seeing the most common words across all texts, this shows that researchers want to see what is holding their current audiences attention and they want to appeal to that interest. Another portion of the project focuses on the distant reading on the context found in advertisements in the magazines over the years. The data shows the different spikes in data, which would be useful to researchers who need to know what to sell to their audience. It can be implied this project was also targeted for students because we see that there was a study of the history of the photographs found on the cover of the Vogue magazines over the years. This would be helpful for students who fare studying the trends of fashion and this can help with building their portfolio or drawing other inspirations.
This project is biased because it focuses mainly on women and women’s fashion. It doesn’t show any correlation to men’s fashion, which would probably be difficult to do. I don’t think it limits the kind of research we can do with distant reading. It actually shows the different possibilities open with distant reading. When someone thinks distant reading, they may only think you can distant read texts, but this project shows those who might be interested that this can work with images too, which is really fun. I would recommend this project to fashion students, Vogue magazine readers, someone studying business strategies or anyone interested in photography and art. This project has information that would be helpful to anyone who is perfecting their craft in any of the mentioned areas above.