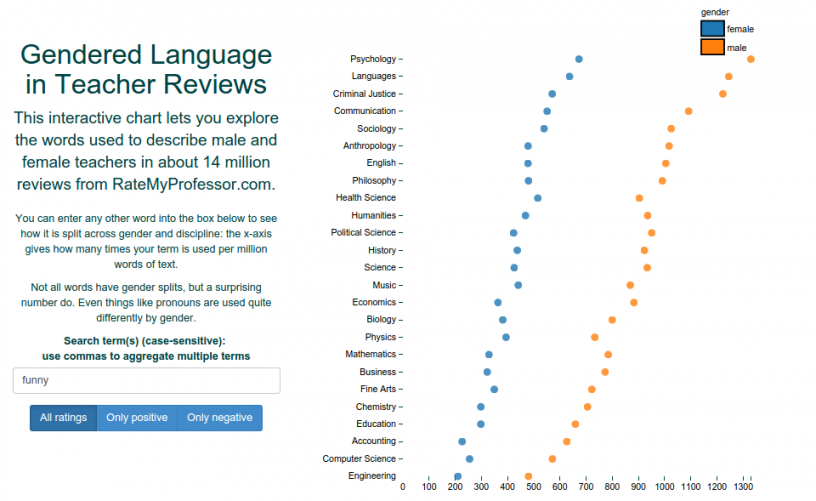 The title of this project is called Gendered Language in Teaching Evaluations, it was developed by Ben Schmidt. This project is currently hosted on his website or by simply googling his name and pressing the third link. This project is very unique because it is truly created by students unknowingly. Schmidt’s website gathers students evaluations of professors they have taken in college from another website known as Rate my Professor.com. This website however is creative because it is an interactive graph that shows the female and male role in orange and blue dots as the data. The x and y axis consists of the subjects vs the amount of times a female or male professor’s evaluation constrained that certain word in millions. It is adjustable in preference if you would like to know if the word was used negatively , positively or both.

This project is groundbreaking because it speaks on the students more so. I googled the word “homework” and pressed “only negative” and found that 1,400,000,000 students used that word in their evaluation talking about female mathematics professors. In almost every subject with that word female professors numbers outshone the male professor which means students are complaining about the workload from female professors the most in every subject on RMP(Rate my Professors). This website accomplishes the awareness of words used to describe female and male professors based off student evaluations. This website is successful in doing so because it comes straight from a legitimate website students use everyday to rate their professors. The target audience for the original RMP website is other students in college. RMP is created to prevent or encourage students to take professor based on the comments on their page. This project by Schmidt however is intended for male and female professors which are the only subjects in this experiment and in the key chart.

As fun and interesting as this project may be it is biased because it frames the information in specific ways that aren’t ongoing. For an example Schmidt reports the words in this project’s database are 14 million however this information grows every single day. Schmidt also admits some words are filtered or not included which reduces the reality of the student evaluation. Words such as “ bitch” , “ slut” or” “asshole”. These words are used to describe professors every single day for specific topics so if they are not included the information is limited. The female and male gender also varies because the professors in the database may have had sex changes and identify as male opposed to female or vice versa. The topics or subjects used in the y axis can also no longer be taught so there are some unreliable factors in this project. Besides female students are more likely to take female professors based on subjects such as Nursing and male students are more likely to pick male professors on varying subjects such as Auto Mechanics so the data is biased.

I would however recommend this project to all my professors because the word searches are very fascinating. I am sure professors secretly go on RMP just like celebrities read the mean or nice things said about them in the blogs. Curiosity will always kill the cat. I think professors would know what students are saying about them as well based on the subject and gender they are in, of course. I also think professors should know because they get into the mind of the students, they get to know what students are saying about them not from a small point of view but from a large database.